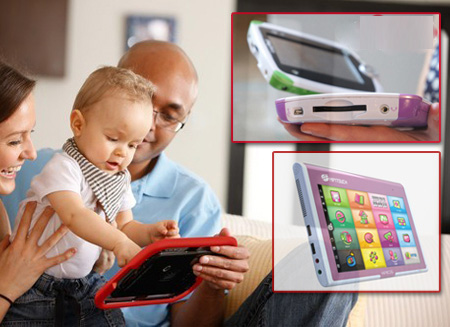 As more and more people begin to become parents after the 80s, the gifts children receive from adults are no longer limited to snacks, toys and playground tickets. With the popularization of smart phones and the fierce progress of the mobile Internet, buying an iPad for children has become a new choice for more and more young parents.

In the past two years, with the popularity of the early education market and the rise of smart phones and tablet computers, many entrepreneurs have also begun to pay attention to business opportunities combined with children's education and mobile Internet. According to the "Report on the Scale and Internet Behavior of Children's Internet Users in 2010", 51.2% of children aged 5 to 15 use the Internet, and 67.7% of children think the Internet is their favorite media form. It can be seen that children's application software is becoming another emerging market that mobile internet entrepreneurs cannot ignore.

The "engineer-daddy" website created by Shanghai dad Li Wenhua is a successful case in the emerging market of children's mobile Internet products. Faced with the massive amount of children's educational software in the APP Store, I believe many parents have the trouble of â€œhow to chooseâ€. Li Wenhua, who has a career background in Shandaâ€™s literary and technical director, said in an interview with the companyâ€™s reporters that when the â€œengineer fatherâ€ website was founded, all members of the founding team were already fathers. Therefore, the entrepreneurial idea of â€‹â€‹the â€œengineer-daddyâ€ website actually comes from its own needs, and it should be attributed to the small children of their own homes.

Li Wenhua: Because I was engaged in digital publishing, I originally engaged in digital publishing in Shanda Literature, so I was very concerned about the iPad. After I bought one, I discovered my daughter because she wanted to use a computer when she was kneeling on my lap. However, she could not use the mouse or the keyboard. She could only say that she wanted to play or she wanted to see something. , need to command adults to move. But the iPad is just liberating (they) and they can use their own fingers to touch anywhere they want to touch. I think this change in light contains a great opportunity, which means that when a child is young, he can interact with a computer or a huge resource library.

Faced with the convergence of the two gold industries, mobile Internet and children's education, â€œEngineers Dadâ€ keenly saw the potential of the market, and began to focus on this emerging market segment, in the PC, web, ios, android. A platform for the development of a series of innovative products and services.

According to reports, at present, companies engaged in the development of children's application software in China include engineers, fathers, Apple TreeBooks, Magic Box Technology, Koala Box, Beva Networks, and Tin Wood Technology. Its business model can be clearly divided into two categories. One is focused on the development and sharing of children's APPs from the very beginning of its establishment; the first is the website, and the cumulative experience of children's APPs is followed by the launch of IOS or Android terminals. Regardless of the mode, the current profitability of domestic children's application software developers is basically achieved through three channels: advertising, channel sharing, and product customization.

Li Wenhua: In fact, it is still a group of people who compare gold, so it has great advertising value in children's education or family-related products. On the other hand, I feel that since we are currently doing channels and communities, in the future we will certainly have channeled income. On the other hand, sometimes we are able to innovate some products and develop customized services for our members. These may also be charged in the future.

Although it is an industry that is rising and is making huge business opportunities, for the current domestic children's application software market, the mobile Internet industry is still more worried than surprises. The industry is unanimously concerned that: At present, the domestic children's application software market faces difficult problems with low threshold, easy copying, and homogenization.

Facing industry concerns, Li Wenhua, the founder of the â€œengineer and dadâ€ website, was optimistic and said that he was not worried about the development prospects of his website. Because, unlike the existing domestic ordinary companies that only develop children's application software, for the â€œengineer dadâ€ website, developing application software is not the â€œmain businessâ€ of engineer dad. The website is more responsible for connecting end users. And child application developer responsibilities. Recently, the "Engineer Dad" website is planning to introduce related products for children's books, hoping to cooperate with children's reading promoters, publishers, etc., to help parents easily find books suitable for the physical and psychological development of children.

Li Wenhua: We should not only do this for children's educational software. In fact, we have now launched the Children's Book Channel. For parents, the iPad is a tool, the cards are tools, and the books are tools. Perhaps the story of my MP3 listening is also a tool. DVDs are also a tool to read. These are one of the tools parents use to perform family education. So for the engineer father, of course, we will use the APP as an entry point, but in fact we feel that the tools of education should be diversified.

When talking about the current development prospects of domestic children's application software market, Li Wenhua frankly admitted that although he is very optimistic about the development prospects of this market, but compared with the more mature children's application software market abroad, the domestic market is still very immature, and this The most important thing to solve is the issue of the original content of our children's software products.

Li Wenhua: I think there should be an industry chain in the future. The so-called industrial chain is like this. It must have childrenâ€™s originality. For example, if the childrenâ€™s stories accompanying them are â€œHans Christian Andersenâ€™s Fairy Talesâ€ and â€œArabian Nights,â€ then our children are not repeating us. What is this generation writing? The real needs are actually some children's originals that can approach their lives. I think this is quite lacking in our country.

Finally, Li Wenhua also gave his own suggestions for the late adopters of the children's application software market. Li Wenhua said that the development of children's application software in the future should start with three major aspects. This is also the most important customer demand that has been summed up in the actual operation of the â€œengineer fatherâ€ website.

Li Wenhua: According to our website statistics, because our website has done so early, the relatively high density from our statistical keywords also reflects the characteristics of Chinese parents. The first is to learn English, which is the earliest; second, there are more pianos, arts, and universals; and there is another major category that is story.

Trait: The products are waterproof, shockproof;

Adervantages: Our products are saled with factory price, and the quality can guarantee, lastly we provide warranty for 1 year.