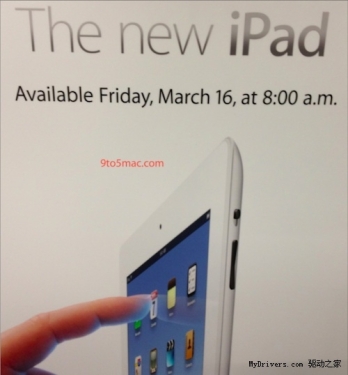 The emergence of the new iPad has triggered a panic buying frenzy. Online pre-sale has been sold out within three days. For this reason, Apple has had to postpone the online order delivery time to March 19 (before Apple said the machine will be on March 16 On the day of sales, will physical store sales be postponed as well? Today, 9to5mac website revealed that the sales of new iPad retail stores will proceed as scheduled.

Before the iPad 2 sales began in the late afternoon, but this may be due to too much demand, Apple this time to adjust the opening time of new products to the morning.

According to the posters exposed on the site, the new iPad will be officially launched at 8:00 am local time on March 16th (Friday) as expected. Apple stores and authorized retailers will all sell. The operator AT&T And Verizon store will provide 4G version.