On December 4, 2013, China opened the door to commercialization of 4G (fourth generation mobile communication technology), namely LTE, in mainland China. This officially issued TD-LTE licenses to China Mobile, China Telecom and China Unicom. For China Mobile alone, its 2014 target is to build 500,000 base stations. It is estimated that after adding 200,000 stations next year, it will be close to 90% of the number of base stations deployed in its GSM 20 years.

On the technical level, China Mobile's TD-LTE is dominated by eight-channel dual-polarized smart antennas. Japan's Softbank mainly reuses PHS (also known as PHS) eight-channel circular array antennas. Other LTETDD operators deploy two antennas as At the same time, the spectrum of each application is different (mostly B41, B38, B40, only China Mobile uses B39 as the main frequency band for outdoor deployment), combined with the supplier equipment, procurement equipment quality, site conditions, application scenarios and Differences in application services and the like will result in differences in TD-LTE network performance and user experience. Therefore, since the beginning of 2010, a series of performance research tests, such as laboratories, small-scale outfields, large-scale outfields, expanded scale outfields, and post-commercial evaluations, have been conducted in mainland China, accumulating commercial experience for TD-LTE nationwide deployment.

This paper takes China Mobile's commercial demonstration area in a province as an example to verify and discuss the performance of TD-LTE field, in order to provide more accurate reference data for future deployment and optimization.

The driving force behind the evolution of 3G to 4G is the innovation and development of new mobile device services, and through technological advances that can be used in mobile communication systems. From the perspective of communication technology itself, LTE is revolutionary with respect to 3G standards. In order to support new services with data exchange type as the core, especially IP services driven by the Internet industry, the main underlying design parameters of LTE wireless interfaces are [3]: data rate, delay, capacity, and so on. This article focuses on data rates.

Taking the TD-LTE downlink as an example, the theoretical peak rate of the physical layer under the 20 MHz system bandwidth, 3D: 1U time slot ratio, and 10:2:2 special time slot configuration is about 120 Mbps. Since the uplink and downlink of the TDD system share the spectrum, it should be converted to the rate of full-time spectrum utilization, that is, 120 Mbps / (4 ms / 5 ms) = 150 Mbps. After the iterative calculation by Shannon formula, the SNR requirement is at least 24 dB. However, from the perspective of the 3GPP protocol, this calculation is not rigorous. To obtain the theoretical peak rate of the Rel-8 standard, the protocol specifies that the transport block size TBsize to be selected is 75376 bits, and the corresponding MCS needs to reach 28 [4]. The SINR here is calculated by the base station based on the channel quality information CQI feedback of the UE, and how high the SINR can be mapped to the MCS 28 and the peak rate transmission is also related to the system vendor implementing the algorithm and the terminal demodulation capability. In an actual network, a signal-to-noise ratio of about 30 dB is usually required to obtain a theoretical peak rate.

For network operators, user experience is one of the core competencies in the era of traffic management. Therefore, Ericsson combined with global commercial experience to propose the concept of application coverage APPcoverage, as shown below. Smartphones and related applications have become the mainstream of mobile communications. Therefore, how to ensure that end users get a good experience of mainstream applications has become an important manifestation of the differences among network operators. At the same time, the traditional network keys such as the connection rate and drop rate of packet-based services are key. Performance indicators KPIs are no longer as sensitive as circuit-switched services. In the figure below, the three percentages correspond to the network coverage. The three numbers are the application layer rates that should be guaranteed under each coverage percentage. The unit is Mbps, and the value may be different for different operators. However, in order to ensure a good user experience and competitive advantage in network performance for mainstream applications, Ericsson recommends 1, 10, and 30. Typically, commercial network testing shows that the 90% point continuous coverage rate is about 1/3 of the average coverage rate of 50% points. 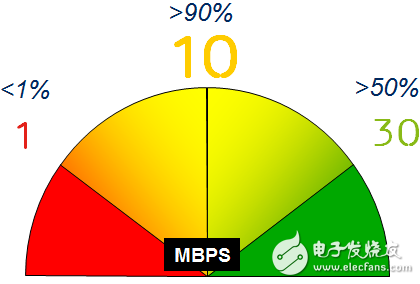