The wind energy industry as a new and promising high-tech industry, especially in the historical period when the country promotes the construction of an energy-saving society, is supported by unprecedented national attention and tilting policies. It is estimated that the total installed capacity of wind power in China will reach 30 million by 2020. The goal of kilowatts provides a great deal of space for the development of the wind energy industry.

This project is one of the 2008 Beijing Green Olympics projects. The purpose is to provide sufficient power during the Olympics and use a 1500kW direct-drive permanent magnet wind turbine. In the early stage, Advantech's ARK-3380 series industrial computer was used to monitor and control wind turbines, one of the two core components of wind power generation.

The 2008 Olympic Games is a major event for the Chinese nation. Moreover, the project has relatively high requirements on the performance and stability of use, and the use environment is rather harsh. Therefore, the products used must be strictly selected. 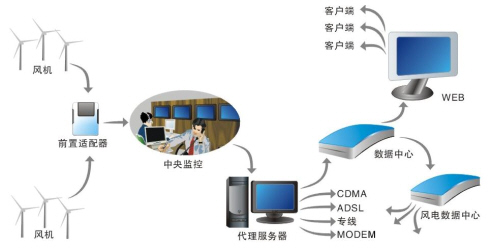 SCADA (Supervisory Control And Data Acquisition) system, ie, data acquisition and monitoring control system, is widely used for data acquisition and monitoring control in power systems, petrochemicals, and water supply systems. The SCADA system is a computer-based production process control and dispatch automation system based on Industrial Ethernet. It can monitor and control the operating equipment in the field to realize various functions such as data acquisition, equipment control, measurement, parameter adjustment and various signal alarms. A variety of acquisition signals and control signals are aggregated through industrial Ethernet to the most advanced data collection processor - Advantech's stringent computer ARK-3380 series.

The ARK-3380 series can provide four Ethernet interfaces, allowing more data to be collected at the front end. Network technologies such as link aggregation and LAN Bypass can be used in the network to effectively improve the transmission efficiency and transmission reliability of the network. .

Can provide more than 3 network interfaces, have good compatibility features, can be organically connected to the front-end equipment through industrial Ethernet.
Â· The main frequency must be above PM 1G, and it can work with the user's program in a stable manner.
Â· At least 2 RS-232 interfaces, one USB interface.
Size requirements can be embedded in the fan's equipment, light weight.
Â· AT power supply mode, DC power supply, can not interfere with other equipment.
Due to the unattended operation of the equipment in the wind tower, the environment inside the wind tower is severe, requiring a temperature of -20 to 60 degrees, high dust resistance, no fan design, and stable operation without stopping for 24 hours.

Because the fan is the most problematic point of failure in a hostile environment, the fanless features of the ARK Series IPCs greatly increase the machine's MTTF (Mean Time to Failure).
Â· Conduction heat dissipation makes it have a good seal, can effectively cut down the dust caused by oxidation of the dust/corrosive gas to the signal conduction point, reduce maintenance costs, and is suitable for high dust and temperature changes in power monitoring points and DCS applications. Larger unmanned occasions use.
Â· The ARK-3380 series integrated multi-network port all in one solution eliminates the need for expansion to help users save costs.
Â·Sturdy appearance, small size, easy installation and maintenance.

Due to the small capacity and quantity of stand-alone wind farms, in order to ensure the safe operation of wind turbines, wind farms are equipped with advanced computer monitoring systems. The system is generally composed of two parts: local monitoring (LCS) and central monitoring (CMCS remote control). Local monitoring includes the following functions:

(1) The operating personnel can control the running status of each wind turbine from the on-site control panel computer screen, such as: wind speed at the wind turbine, generator voltage, current, power factor, spindle speed, gear box and bearing Temperature and so on.

(3) The control system can automatically issue a control command that automatically adapts to the wind direction (that is, automatic yaw) or stop according to the wind speed and direction detected by the control system, and can also perform self-diagnosis on whether the wind turbine has a failure or not. The system can also detect the power grid. If it is found that the grid voltage and frequency are not working properly, the system will be shut down immediately and will be automatically started after the power grid recovers.

(4) The control system has an advanced recording function that can record all occurrences of faults or abnormal operating conditions and tell the operator when the fault occurred. The system can also carry out production reports, which can record the monthly power generation of the wind turbine, as well as the accumulated power generation and hours of operation.

Facts have proved that the combination of ARK-3380 series + ELO has been stable and reliable for more than one year. It has higher stability and reliability than traditional integrated products. It has been highly recognized by users, and it also enhances Advantech's continued focus on major domestic infrastructure projects. Construction of confidence and enthusiasm.