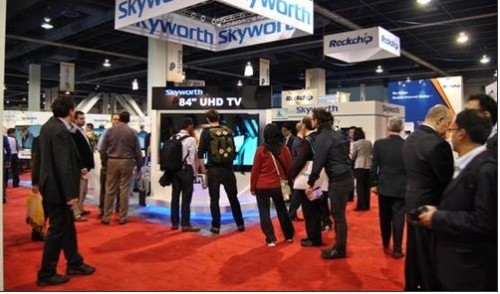 Recently, Skyworth Group took Skyworth 4K HDTV at the 2013 US International Consumer Electronics Show (CES) and caused a huge sensation at the show. As the world's largest consumer electronics show, CES has attracted many manufacturers from all over the world to exhibit each year. They bring the world's most cutting-edge products and technologies and represent the future of the international consumer electronics industry. In this exhibition, major home appliance manufacturers exhibited large-size 4K ultra-high-definition televisions and smart TVs. Skyworth 4K HDTVs attracted a great deal of attention from visitors, and the focus of the industry in the future can be foreseen.

OLED outlook is unknown, 4K HD into the mainstream

TV display technology upgrade will almost become a hot spot in the industry. After LED replaces CCFL LCD in 2010, LED LCD TV has become mainstream. OLED as a display with higher performance, more energy-saving, and thinner technology is regarded as the future of the display. At this CES show, Japanese and Korean manufacturers have shown their OLED products one after another, and they are eager to revive the increasingly declining market with high-end display technologies. Due to the high cost of OLED manufacturing, it is difficult to achieve mass production. In the future, the trend of OLED replacing LEDs is not yet clear.

Relative to the prospect of OLED is difficult to predict, 4K large-size TV can be said to be one of the highlights of this exhibition. Skyworth, a leading domestic color TV company, exhibited an 84-inch UHD ultra-high-definition cloud TV with a physical screen resolution of 3840Ã—2160 (4KÃ—2K), which became clear through UHD single-chip decoding of 4KÃ—2K program sources. More than 4 times the full HDTV 1080P TV's new generation TV. In combination with ultra-high-definition chip processing, the scene brings viewers the same distance, larger size, ultra-long distance, and clearest display effect. The extremely high resolution enables the super-large size to perfectly display the effect. The real super vision makes the viewing vendors and tourists unbelievably amazing.

Yang Dongwen, president of Skyworth Group, stated that if OLED technology can't break through the large size in the next 3-5 years, then it's likely to be a small-size technology; if 4kX2k breaks through in color saturation and cost, it will appear in large size. OLED will lose its advantage. It will be 4kX2k in 2013.

TV compatibility requirements are higher, and smart TVs are in dire need of differentiation
After entering the Internet era, home entertainment has become more diversified, and television is no longer the only source for consumers to watch movies and TV programs. Under the trend of triple play, content service and compatibility of TVs will face higher levels. Claim. Compared with traditional flat-panel televisions, smart TVs have more powerful application functions, and they have become more and more obvious as home entertainment terminals, and are more suitable for future trends. However, at present, many smart TVs equipped with the Android platform are similar in function and serious in homogeneity.

Yang Dongwen said, â€œIn the LED and 3D gradually become the standard for LCD TVs, color TV industry in the short term within the upgrade space for LCD panel technology has reached a critical point. In industrial design, LGD, Samsung also lost after the introduction of borderless technology The space for continued upgrades. As a result, the search for technological breakthroughs in the smart TV field has become the consensus of the entire color TV industry." It is difficult for color TV manufacturers to introduce differentiated innovation technologies on the Android platform. Therefore, it is adopted in the field of content and application technologies. The only way is to find differences in ways of cooperation. Skyworth has launched a "Healthy Cloud TV".

The Skyworth Health Cloud TV at the CES show guarantees a strong screen, Android 4.0 system and dual-core chip support, and is equipped with a smart operating system. It can allocate cloud accounts for family members and automatically aggregate cloud resources. Push, share and other cloud interactive full-generation TV. Skyworth cooperated with authoritative organizations to take the lead in realizing the monitoring of human health such as fat, weight, and blood pressure on the TV, environmental health monitoring of PM2.5, temperature, humidity, combustible gas, etc., and management of historical monitoring data in the cloud to provide professional health guidance and quantity. Customized healthy sports solutions. At the same time, Skyworth has also started cross-border cooperation in the provision of television content. On December 3, last year, Skyworth joined Southern Media and Premier Pengle to create a "Direct Hollywood" section and announced its official launch. Consumers can directly enjoy more than 4,000 movie works at home and abroad on the excellent friends and Pulex Internet TV content platform through Skyworth Cloud TV, and more than 25,000 television shows.

From technology carriers to platform services, from television terminals to film source content, to achieve the full integration of hardware, platforms, and content, the future direction of the development of color TV has already emerged from the CES show.