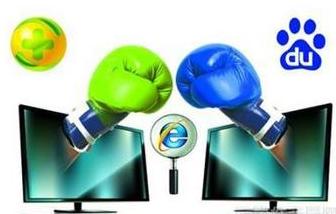 The reporter confirmed from inside Baidu that after many discussions with both Jinshan and Tencent, the three parties have reached an agreement to jointly enter the Internet security field. In addition to helping expand the installed capacity of Kingsoft through search promotion, Baidu also plans to launch its own anti-virus software, perhaps will restart the "Baidu security guards" two years ago, to make up for Li Yanhong worried client shortcomings.

This heavy cooperation is dramatic because of its clear smell of gunpowder. In the industry's view, Kingsoft, Tencent and Baidu are the three most envied enemy of Qihoo 360's grievances in recent years. The three parties directly attacked the 360 â€‹â€‹base camp and may have more resonance outside the commercial interests. When Zhou Hongyu himself was interviewed by reporters, he was unceremoniously described as "the biggest joke of the Chinese Internet."

According to information obtained by Baidu and Jin reporters, Baidu has already spent a lot of money on purchasing a set of virus databases. Last year, it purchased low-key acquisitions of the domestic security company Super Patrol. Inside it, the project team named "Baidu Security Guard" was formed in 2011. This security product also plays free cards, and it also has Jinshan's cloud security technology implanted. Its functions are similar to those of 360 security guards. Trojans are killed. , Bug fixes, boot optimization, real-time protection, plug-in cleanup, download protection and more.

Based on various considerations, Baidu's security guards did not bring it to market as expected.

For the aggressive Baidu, the industry in addition to their product of concern, there may be more than a suspicion of watching the show: In this way, 360 how to parry?

Kingsoft, Tencent and Baidu are the biggest rivals of Qihoo 360 in recent stages. There is no need to go into details about the vigorous "3Q Wars" and "3B Wars". The old accounts of Zhou Hongyi and Fu Sheng, and the "Little Three Wars" and Xiaomi Lei Junjie The new enemies under it all make it difficult to restore the relationship between 360 and Kingsoft.

In the previous Q3 financial report, Zhou Hongyi proudly announced that the number of 360 users on the PC side had increased to 442 million, covering nearly 95% of the users of the Chinese PC Internet, and 360 mobile phone guards on the mobile side also reached 149 million. However, in spite of this, people in the industry generally believe that if the three parties work together to conquer, 360 will face a fierce battle. When Zhou Hongyi was interviewed by reporters, the news that the three alliances had been notified by default had been obtained in advance. "Welcome Baidu to enter the security field, and hope that Baidu can face the 360 â€‹â€‹into the search field, fair competition. Any alliance, should be considered as the interests of users, rather than the use of monopoly position fertilizer users, should not be to curb the development of opponents as the goal "Hong Zhou said.

Zhou Hongyi also claimed that traditional anti-virus software vendors had no incentive to clear rogue software for users because they were unprofitable. Only 360 insisted that users were supreme. "I hope they will first consider the real reason why 360 users are welcome when they are forming alliances."

â€œThe two largest monopolies have jointly supported a minion and engaged in monopolistic alliances, allegedly to break monopolies. This is the biggest joke of the Chinese Internet.â€ After the interview, Zhou Hongyi sent this message to reporters.

The reporter learned from informed sources that Baidu, Jinshan, and Tencentâ€™s top executives frequently met several months ago and finalized the partnershipâ€™s safety consensus. At the same time, Baidu and Jinshan did discuss the cooperation around the capital level, but in the end it was a shareholding or a holding company, and it is not currently available for disclosure.

In fact, back in September last year, Baidu led the establishment of the first Internet security alliance, Tencent, Jinshan, Rising and other five companies have already come together. According to the above sources, based on the friendly relationship, Jinshan has now opened Baiduâ€™s backend risk website and virus database to Baidu; in return, Baidu added some security detection information from Jinshan to some search results. "By the completion of this round of cooperation, Baidu's search and promotion efforts will be further increased." The source said that by then, in addition to the main push Jinshan safety tips, Baidu will also use the box calculation to give Jinshan more diversified in the search results. The way to promote. It is understood that as a major shareholder of Kingsoft, Tencent also agrees with the above plan.

In the 2012 first half of the security software market share published by iResearch, except 360 security guards and 360 antiviruses, with the monthly average coverage of 369,533,000 and 367,510, respectively, divided by one or two digits, the QQ computer housekeeper followed 84.121 million. Third in the back row, Jinshan drug tyrants, Jinshan guards, Jinshan network shield stuck four, seven, ten. If search engines directly join the user wars, then the existing grid situation will usher in a melee.

For the 360 â€‹â€‹to enter the search, Baidu also reserved a note: its own brand of anti-virus software, may soon be introduced to the market, "3B war" completely evolved into close combat.