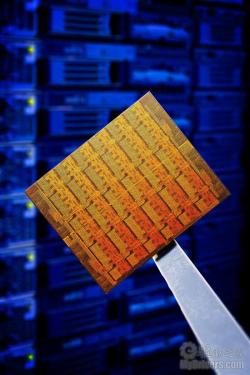 At the end of last year, Intel announced a 48-core processor called the Single Chip Cloud Computer (SCC). In the first half of this year, the system equipped with this experimental processor has been shipped to scientific research institutions and software developers for pre-development. At the Supcercomputer 2010 high-performance computing conference held in New Orleans in the United States, Intel researchers revealed the development prospect of this architecture.

Intelâ€™s Timothy Mattson said at the meeting that the scalability of the SCC architecture is very strong: â€œIn theory, this architecture can be extended to 1000 cores. I just want to increase, increase, and increase the core.â€ Allegedly, Only when it reaches the order of 1,000 cores, the core size or the core Internet system in the architecture will encounter bottlenecks, which will have a negative impact on performance.

In Intel's view, the future development of processors will continue to increase the number of cores as the main approach. With the increase in the number of cores, you will certainly encounter scalability problems. For example, to ensure that all cores can access system memory equally, that is, cache consistency, when the core reaches a certain number, increasing the overhead brought by the core will offset its performance improvement. Intel's solution at this time was to abandon the idea of â€‹â€‹cache coherence and allow cached information to be passed between cores. The current SCC architecture is such a product, manufactured using a 45-nm process, integrating 48 Pentium-class cores in an area of â€‹â€‹567 square millimeters, connected in a similar manner to the Internet.
Home
Recent Posts
Archives
tags