Most models are still using ordinary halogen headlights, and better models use xenon headlights. At most, some innovations have been made in the construction of the lamp group, and the optical principle of the lens and the reflector lamp is used to improve the efficiency of the light, but the technical innovation of the lamp group itself is insufficient. LED car lights refer to LED technology used inside and outside the vehicle for external and internal lighting. LED car lights can be widely used to create an interior environment with a life expectancy of 50,000 hours. The structure of the LED is strong and is not easily affected by vibration. The brightness of the light output during use will not drop significantly. 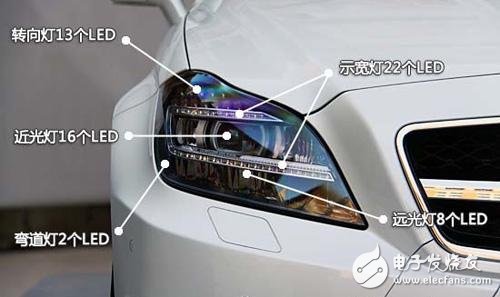 LED lamps are increasingly used in these automotive front lighting applications, mainly because of their unique advantages in style and design compared to conventional incandescent or high-intensity discharge (HID) lamps, and more recently It is thanks to the low power consumption feature. However, it is equally important that with the continuous development of LED technology, higher power levels and wider color gamuts can be provided. At present, in the front lighting application of automobiles, the performance of LED lamps is no less than that of incandescent lamps.

For car manufacturers, the advantages of style are still one of the main reasons for using LED lights. Clearly, automakers see opportunities to further consolidate their car brands. A variety of lighting designs have benefited from the greater design freedom offered by LED lights. The more famous early examples include the Audi A8/A6. However, the focus is shifting to other advantages that LED lights bring to automotive lighting applications. These include lower power consumption, longer life and faster start-up times.

The University of Michigan School of Transportation Research (UMTRI) evaluates the energy consumption levels of conventional incandescent and LED solutions for daytime lighting. They found that for equivalent functions, the LED solution's energy consumption level is 50% lower (23W vs. 46W). This savings translates directly into fuel efficiency while reducing CO2 emissions from passenger cars by 50%.

This fuel efficiency is important for automakers preparing to develop all-electric vehicles. For consumers, an important purchase standard is the distance that an electric car can travel when it is fully charged. To this end, automakers are looking for ways to improve the energy consumption of various functions, thereby improving the car's endurance. LED lights clearly have great energy-saving advantages and are increasingly becoming a natural choice for lighting design engineers.

Another important factor contributing to the inefficiency of LED efficiency and LED penetration in automotive lighting applications is the LED's illumination efficiency, which is lumens per watt (lm/W). This indicator measures the amount of light output per watt of energy consumed by an LED lamp. The higher the value, the higher the efficiency with which the LED converts input power to light output. Today's high-brightness LEDs can achieve 100-150lm/W illumination efficiency, while a 60W incandescent lamp is only 10-18lm/W. The improvement of this indicator has greatly expanded the application range of LED lamps and expanded into the front lighting system of the car based entirely on LED lights. In particular, LED-based headlights include features such as high beam and low beam adjustment. The next section will cover some of the challenges of using LED lights in automotive applications.

The automotive environment poses a huge challenge for LEDs. LEDs must provide a stable light output. Even if the electrical conditions and thermal conditions around the headlights change, the flux and color point of the lights must remain constant. Since the light output of the LED is proportional to the current applied to the LED, and the LED uses a diffusion production process, even in the same batch of products, the light output may be different under the same driving current. In order to avoid this unfavorable difference, LEDs are often selected based on certain parameters. Filtering ensures that the same batch of LEDs is more consistent in terms of light output and color point.

The LED must also ensure that the light output meets the minimum legal flux requirements for the specific application over the ambient temperature range of -40 Â° C to +125 Â° C. The headlamp's luminous flux needs to be around 1,000 lumens and provides the minimum required light output over the operating temperature range. In order to achieve this luminous flux requirement, several LEDs may be connected in series or in parallel. Bringing together a number of high-brightness LED lights together places high demands on thermal management, as the LED's light output drops dramatically as the LED temperature increases, and the color point shifts. Therefore, the heat emitted by the LED during the generation of this order of light must be conducted out through the heat sink. In some extreme cases, it may be necessary to reduce the LED drive current to avoid overheating and damage of the LED. The automotive industry also imposes stringent requirements on the reliability of LEDs. LED solutions must be able to meet the stringent requirements of the AEC-Q100 standard. This means that LEDs and driver electronics must pass the standard certification.

For the automobile, the LED light source (not limited to the headlights) has the following seven advantages: 1. Energy saving and low cost: The luminous efficiency of the LED is 80%~90%. If we use our daily energy-saving lamps to compare, energy saving The lamp is 4/5 more energy efficient than the incandescent lamp, and the LED is 1/4 more energy efficient than the energy saving lamp. In the car, the same daytime running lights, LED components consume only 1/20 of the halogen lamp. The cost of LED components has also been greatly reduced year by year, and the current cost and price are still falling by more than 20% per year;

2, long life: LED components used in cars can basically reach 50,000 hours, and well-known automotive lighting suppliers have been able to provide LED components with a lifespan of up to 100,000 hours, equivalent to 11 years. Considering the frequency of use of the lights, the LED components do not need to be replaced during the design life of the vehicle. In contrast, the life of the xenon lamp is only about 3,000 hours. And LEDs make the shape and lines of the headlights richer, and the recognition at night is higher;

3, good durability: LED components are simple in structure, impact resistance, shock resistance is very good, not easy to break, can be well adapted to various environments;

4, LED components are small, compact and easy to arrange and design: This is a huge advantage of LED, this advantage fully meets the evolutionary needs of automotive manufacturers in design, breaking the shackles of the past lighting system for modeling innovation, let us have More creative car products;

5, fast response: LED lighting only needs microsecond level, can be quickly lit up on the taillights and turn signals to achieve better warning effect, used in the headlights, compared to xenon lamps and halogen headlights High response speed, better protection for driving safety;

7. Low-voltage DC can be driven, the load is small, the interference is weak, the requirements for the use environment are low, and the adaptability is good. A booster is not required like a xenon lamp.

As the market for automotive LEDs grows larger, new suppliers are bound to become more and more, competition is intensifying, and the quality of suppliers' products is uneven, which will inevitably affect market reputation and affect final consumer demand. As long as the cost of LEDs falls to the same level as incandescent lamps, cars other than economy cars will use LEDs on a large scale. Undoubtedly, the use of high-brightness LED lighting will become a major feature of future cars, thanks to LEDs compared to tradition. The incandescent lighting solutions have many of the basic advantages. In addition, the use of LED lighting can also drive changes in automotive design techniques and design styles. However, just like any innovative technology, LEDs still have to overcome many difficulties before they are widely used in automotive lighting.

For example, NXP, ON Semiconductor, Infineon, and Fairchild have plans for automotive LED headlights, which provide car manufacturers with more energy-efficient options to meet consumer fuel economy requirements and improve visibility safety to reduce or avoid The traffic accident rate and the creation of a personalized vehicle atmosphere have reached the consumer's unique styling expectations for the car. The overall annual compound growth rate of the car lighting system will reach 10%, and the market development potential is huge.