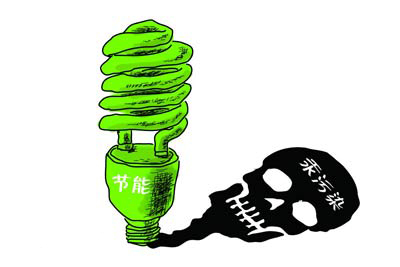 Since 2000, it has rapidly entered China's tens of thousands of households. By 2009, the penetration rate has reached 90%. In the past decade or so, China has produced a large number of waste energy-saving lamps. However, unlike the situation in which â€œgovernment actively formulates policies to guide recycling and disposal, and people form habits and actively participate in recyclingâ€, China has no recycling policies yet, and ordinary people are The environmental hazards of energy-saving lamps are also poorly understood.

â€œLighting up an energy-saving lamp, a big step in low-carbon lifeâ€, energy-saving lamps, with their advantages of low power consumption and long life, have rapidly entered China's tens of thousands of households since 2000. By 2009, the penetration rate had reached 90. %. In the past decade or so, China has produced a large number of waste energy-saving lamps. However, unlike the situation in which â€œgovernment actively formulates policies to guide recycling and disposal, and people form habits and actively participate in recyclingâ€, China has no recycling policies yet, and ordinary people are The environmental hazards of energy-saving lamps are also poorly understood.

Under the premise of achieving the same lighting effect, the energy-saving lamp consumes 1/5 of the power of an ordinary incandescent lamp, and its lifetime is 6 times. However, due to the manufacturing process, the mercury pollution generated by energy-saving lamps is getting more and more attention. It is understood that an energy-saving lamp contains an average of 0.5 milligrams of mercury. If it penetrates into the ground, it will cause 90 to 180 tons of water pollution. Because the boiling point of mercury is low, it can evaporate at room temperature. After the waste energy-saving lamp is broken, the concentration of mercury in the surrounding air can be exceeded by a hundred times. Once the mercury that enters the body exceeds the standard, it will destroy the human central nervous system. A single inhalation of 25 milligrams of mercury vapor can cause death. In addition, there are paint, metal and other harmful substances inside the energy-saving lamp, which will pollute the environment. According to incomplete statistics, over the past few years, the country has promoted up to 200 million energy-saving lamps, and in recent years, it is the period of large-scale replacement. However, it is regrettable that our country is still blank in terms of energy-saving lamp recycling and harmless treatment. A large number of broken energy-saving lamps are buried in landfills or exposed to the air, seriously damaging the environment.

Fortunately, many people have realized the environmental hazards caused by energy-saving lamps and started to act. In early February, a well-known lighting company in China launched the â€œRecycling of Used Energy-saving Lampsâ€ in Shanghai. According to the plan, at the end of this year, the recycling bins for waste energy-saving lamps will be placed in 130 communities in Shanghai; and the consumer rights holders in Deqing County, Zhejiang Province, will be priced at RMB 0.5 each. Recycling used energy-saving lamps and promoting environmental protection concepts. Jiang Keji expressed that he hopes relevant departments will issue relevant policies as soon as possible, and that the recycling bins for used energy-saving lamps can also be set up in the communities and supermarkets, and the public can also be encouraged to develop awareness of recycling as soon as possible through â€œreplacement of oldâ€ or giving away small gifts.

Yesterday, the reporter discovered at the sales offices of a number of large-scale supermarkets in Nanjing that the energy-saving lamps of some brands indicated at the bottom of the box that â€œif the product is damaged/finished, please dispose of it according to the requirements of the local environmental protection regulationsâ€. However, when a reporter asked a supermarket clerk if an abandoned energy-saving lamp could not be recycled, the clerk said that supermarkets and manufacturing companies did not specifically recycle this service. The reporter then called the environmental hotline 12369. The staff said that the environmental protection department did not participate in the government's promotion of energy-saving lamp activities. How to recycle the waste was not clear.

1. You can find the nearest garbage recycling station or environmental protection station on your city government website. Some cities also have mobile garbage collection centers.

2. Ask the store where you purchased the lamp if you can accept the used lamp. Some stores are authorized by the government and can be recycled and sent to the recycling station.

3. In supermarkets where you purchase light bulbs, there are boxes for recycling light bulbs that can be used to discard used bulbs.

4. There may be a dedicated box for discarding energy-saving lamps in the garbage room of your residential area.

7. When discarding energy-saving lamps, be careful not to crush them, even if you put them in the recycling center.

Germany: a total of 8000 recycling points

Statistics from the German environmental protection agency show that in recent years, Germanyâ€™s channels for collecting energy-saving lamps have grown at a double-digit percentage each year. At present, Germany has more than 8,000 collection points. In particular, the growth of commercial institutions is the fastest. At present, 2/3 of Germany's collection points are located in commercial establishments. These recycled energy-saving lamps are properly disposed of, and more than 90% of the parts are reused after being recycled.

The German Society for Nature Conservation calls on the government to pass legislation that retailers must be responsible for recycling used bulbs. At present, German government departments are demonstrating energy-saving lamp recycling legislation.

Japan: The recycling system is perfect

Japan also has strict procedures for recovering energy-saving lamps. Take Tokyo as an example, the government requires that energy-saving lamps be placed in plastic garbage bags and â€œbadâ€ garbage should be written on the bags and prohibited from being mixed with resource-based waste. In addition, special collection points will be set up in supermarkets or convenience stores. The government also provides certain economic subsidies. Recycling points can carry out some preferential activities, such as redeeming goods with discarded energy-saving lamps, or performing points.

Most of the recycling factories enjoy government subsidy, and the energy-saving lamps recovered from the factory are also recycled: by cutting, the washed glass is used as a heat-resisting material for housing or a new energy-saving lamp material; the aluminum lid is melted by high temperature As a new aluminum material, it will be reused; the mercury will be gasified through high-end chemical technology, and the discharged gas is basically free of pollution to the environment.

In Japan, the pollution of used energy-saving lamps can be kept to a minimum. In addition to the government's efforts, a high awareness of waste separation by enterprises and residents cannot be ignored. In Hokkaido, there are specialized recycling facilities for discarded energy-saving lamps. The collection method of 7% is collected by various manufacturers, and 93% is collected by non-governmental environmental protection organizations.

Product features
1.  The smart pulse with fast rising front is resonant with the crystal of lead sulfate to dissolve the large lead sulfate crystal under the action of charging pulse, which can improve the capacity and prolong the service life of the battery.
2.  No need to add any chemical additives, does not change the internal electrolyte composition of the battery, safe and reliable; For water loss batteries only need to add deionized water before restoring. The output pulse voltage and pulse current are strictly limited.
3.  12 independent output, can repair 12PCS 2V/100Ah-3000Ah cells at the same time without interference. Each group is equipped with a separate voltmeter to monitor the voltage of the repaired battery in real time.
4.  Each system is equipped with "capacity selection" gear, according to the different capacity of the battery to select the appropriate gear, can be ensure better protection of battery plate in restore working.
5.  Each system is provided with automatic repair function, automatic repair system will smartly adjust the pulse duty ratio based on the receptivity of the battery without anyone on duty
6.  Each system is equipped with "High resistance repair" function, select the high resistance repair, specially for the long term stored batteries, even if the OCV is 0 Volt, but also can be easily activated.