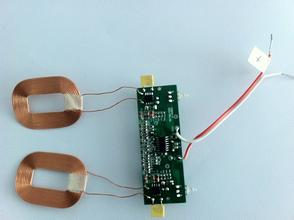 Interesting wireless QI charging technology liberates your phone and no longer uses a wired charger to tether your phone. Allows you to easily charge your phone at any time.

2. Development History As early as the 1930s, Michael Faraday discovered that changes in the surrounding magnetic fields will generate electrical currents in the wires. In the 1890s, Serbian scientist Nikola Tesla applied for the first patent.
Unfortunately, this research has been delayed for a century. The biggest obstacle is the low transmission efficiency and danger. Electromagnetic radiation is only suitable for transmitting information and is not suitable for transmitting energy. Because radiation is not directional, energy will be wasted in useless space. Some people think of the use of directional electromagnetic radiation, such as lasers, but their operability is not strong and dangerous.
Prof. Xu Shuyuan of the Department of Electronic Engineering of City University of Hong Kong successfully developed the â€œWireless Battery Charging Platformâ€ in the early years. Several electronic products can be placed on a charging platform. No external wires are needed, and charging is done through the low frequency electromagnetic field. The time is no different from traditional chargers. However, this technology still requires the product to contact the charger. It mainly uses the near-field electromagnetic coupling principle.
Researchers at the Massachusetts Institute of Technology in the United States have made new advances in wireless transmission of power. They used a power source two meters away and â€œseparatelyâ€ lit a 60-watt light bulb designed by SorjaÄiÄ‡. There is a distance limit for energy transmission. The smaller the receiver is, the shorter this distance is. He calculated that laptop-sized objects can receive wireless power transmission within a few meters, "so that installing an emitter in each room would power the entire home's laptop."
Soryacchi hopes to increase efficiency to 70% to 80% through the use of different materials and improved technologies. They believe that the improved device will wirelessly charge laptops, mobile phones, and other devices in 3 to 5 years.

3. Working Principles Physicists have long known that energy can be effectively transmitted between two objects with the same resonant frequency, and the interaction between objects at different frequencies is weak. The singer's singing can shatter one of the different water bottles without affecting the other bottles. It is also like when we are swinging, just sitting on the top and letting the legs swing in synchrony can give the swing the same power.

Wireless charging technology takes advantage of this principle. Similarly, wireless charging technology also applies the principle of electromagnetic wave induction, and the related AC induction technology. A technology that sends and receives the generated AC signal at the sending and receiving ends to send and receive the induced AC signal, the user only needs to Charging devices can be charged on a "flat", which used to appear on watches and razors, but was unable to effectively charge large-capacity lithium-ion batteries.
A new type of wireless charger was originally invented by a British company. It looks like a plastic mouse pad. This â€œmouse padâ€ has dense arrays of small coils, so it can generate magnetic fields and transfer energy to a dedicated device. Receiving the electronic device of the coil to charge it. The receiving coil is made of a magnetic alloy wound around a wire and its size and shape are similar to those of chewing gum, so it can be easily attached to electronic equipment. Placing a cell phone or the like on the pad will charge it, and it will charge multiple devices at the same time.

Charging technology has appeared before, but this new invention is more convenient and practical. Mobile phones and other devices can be charged at any position on the "mouse pad" as long as they are attached to the receiving coil. Unlike previous technologies, they do not require precise positioning. Several devices are placed on the mat at the same time and can be charged at the same time. The magnetic field generated by the charger is very weak and can charge the device without affecting nearby credit cards, videotapes, and other items that use magnetic recording data. The wireless charging system mainly adopts the principle of electromagnetic induction, energy coupling through the coil to achieve energy transfer. As shown in the figure, when the system is working, the input terminal will convert the AC mains power into DC power through a full-bridge rectifier circuit, or use a 24V DC power supply directly to supply power to the system.
After passing through the power management module, the DC output is converted into high-frequency alternating current through the 2M active crystal oscillator to supply the primary winding. By coupling the energy of the two inductive coils, the current output by the secondary coil is changed into a direct current by the receiving converter circuit to charge the battery.
A changing magnetic field produces a changing electric field. A changing electric field produces a changing magnetic field whose size is related to their rate of change. The rate of change of the sine function is another sine function, so the electromagnetic wave can propagate out and the induced voltage The generation of the magnetic flux is related to the change of the magnetic flux, so the magnetic field inside the coil generates an induced voltage, thereby completing the charging process.
Mobile phone wireless charging is a relatively novel charging method. Its principle is actually very simple. It is to separate the ordinary transformer main and secondary to achieve the purpose of wireless. Of course, the charge rate of wireless charging is relatively high, and even abandoning the core directly between the coils can achieve the effect of energy transfer.

Why we recommend iPhone 8 Battery Replacement with TI IC?