In 2010, American automakers introduced a novel feature that allows car owners to control the car lock and start the engine through a smartphone in any corner of the globe. This connection function needs to depend on the remote information communication system on the car, and this system is currently the standard configuration of many car models.

Before the launch of this smartphone, a university research group released a research report that pointed out that by using the defects in the embedded system of the car, the key systems of the car (for example, brakes, engine throttles, etc.) ) It is easy to be manipulated maliciously.

These researchers have studied how to use the â€œmodeâ€ technology to invade from low-security networks to key systems. During the driving of the car, brake failure and engine runaway occurred, which showed that the attack could indeed put the passengers in danger.

Connecting a car to a wide area network is the culprit of leading sophisticated attackers. A flaw could allow a remote attacker to threaten a long train of vehicles driving next to it.

The researchers did not tell us what we can do for current embedded car safety. But as we will discuss later, we must make substantial changes to automotive technology to better isolate the network subsystem and life-and-death safety functions.

The figure below shows some electronic systems inside a contemporary car. 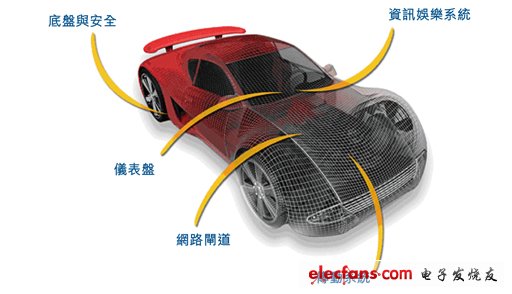 High-end luxury cars include up to 200 microprocessors in a corresponding system with a total of 100 components or electronic control units (ECUs). These ECUs are connected by many different types of networks, for example, Controller Area Network (CAN), FlexRay, Local Interconnect Network (LIN), and Media for System Transmission (MOST). Automotive OEMs need to integrate ECU components and software from dozens of Tier 1 and Tier 2 suppliers. But OEMs will not strictly control the development process of their suppliers.

So people will not be surprised that this situation cannot be sustained. OEM manufacturers will bear the consequences of the "barrel theory": As long as an ECU with serious reliability problems, it may cause delays in delivery or vehicle failure, which will damage the reputation.