According to the news from the Ministry of Industry and Information Technology on the 14th, the "12th Five-Year Development Plan for the Internet of Things" was officially released. According to the requirements of the "Planning", China's Internet of Things industry will initially complete the construction of an industrial system by 2015. In this regard, Qian Wenli, an analyst at Jinyuan Securities, said that based on the compound annual growth rate of 20% for the industry in the next five years, in 2015, China's Internet of Things market is expected to exceed 500 billion yuan.

Is expected to open the 500 billion market

According to the "Planning", China's Internet of Things industry will initially complete the construction of an industrial system by 2015, and vigorously conquer core technologies, including UHF and microwave RFID tags, smart sensors, embedded software, position sensing technology, and two-dimensional code decoding chips And other sensing technologies; new short-range wireless communication technology suitable for the Internet of Things; massive information storage and processing suitable for the Internet of Things, as well as processing technologies such as data mining and intelligent analysis of images and videos; Four types of technologies such as networked information security will receive key support during the "Twelfth Five-Year Plan" period. 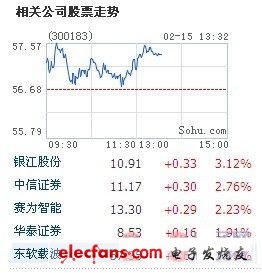 Qian Wenli, an analyst at Jinyuan Securities, said that although the â€œPlanâ€ did not specify the scale of industrial development in 2015, according to the previous media reports that the industrial scale reached 500 billion in 2015, the compound annual growth rate from 2011 to 2015 About 20%. Zhang Xinfeng, an analyst of CITIC Securities, believes that with the vigorous promotion of policies, the compound annual growth rate of the Internet of Things industry in the next five years will be expected to exceed 30%.

Optimistic about the leading stocks in 9 areas

Hua Chun Securities researcher Guo Chunyan believes that for the 9 demonstration areas proposed by the plan, companies that have already established a leading position in the field will gain rapid growth opportunities in the next three years of large-scale investment. She recommends that investors focus on related areas Leading stocks: Yinjiang shares and Saiwei Smart in the field of intelligent transportation; Neusoft Carrier, a provider of core components for smart grids; Neusoft Group and Weining Software, leaders in smart medical; Yuanwanggu, a provider of traceability perception products for intelligent agriculture; Intelligent Security equipment providers Hikvision and Dahua; Anjubao, a pioneer in smart homes; City Government â€™s leading digital government; and Tongfang, an expert in smart environmental protection.