With the development of radar technology, radar has put forward many new requirements for signal transmission. Many modern radar systems have multiple radar stations working together. Each radar station is far apart, tens of kilometers or even hundreds of kilometers. The long-distance transmission of radar signals is the basis of multi-station cooperative work. This multi-station cooperative working radar system includes multi-base radar, fence radar, radar networking and distributed radar. Multi-base radars, fence radars, radar networks, etc. only need to transmit point and track information, which has a low data communication rate and a small communication capacity; distributed radar needs to transmit real-time echo data after A / D conversion of received signals The biggest feature of its communication requirements is also the biggest difficulty lies in the long-distance real-time transmission of ultra-wideband large-capacity data.

SDH is a comprehensive information transmission network that integrates multiplexing, line transmission and switching functions and is operated by a unified network management system.

SDH has a set of standard information rate structure levels, called STM (Synchronous Transport Module). The most basic and most important module is STM-1, with an interface rate of 155.52 Mbit / s. The higher-level STM-N signal is formed by synchronously multiplexing N STM-1 and interpolating bytes. The SDH standard interface rate is shown in Table 1.

ITU stipulates the frame structure of STM-N signals in ITU-T G.707. The frame of STM-N is a rectangular block frame structure with bytes as the unit, which is composed of 9 rows in the vertical direction and 270 bytes in the horizontal direction. The transmission is in order from left to right, from top to bottom, and the frame period is 125 Î¼s.

When SDH transmits business signals, various business signals have to go through three steps of mapping, positioning and multiplexing to enter the SDH frame structure. Mapping is the process of loading signals of various rates into the corresponding standard container (C) after adjusting the code rate, and then adding POH to form a VC (virtual container). The deviation of the frame phase is called the frame offset, and positioning is the process of receiving the frame offset information into the TU (tributary unit) or AU (management unit). It passes the function of TUPTR (TU pointer) or AUPTR (management pointer) to fulfill. Multiplexing is the process of putting multiple low-priced channel layer signals into the high-priced channel through code rate adjustment, or multiple high-priced channel layer signals through the code rate adjustment into the multiplexing layer.

With the continuous development of communication technology, more and more applications of different types need to be carried through the SDH transport network. Due to the limited number of standard interfaces that SDH can provide externally, in order to more efficiently carry certain rate types of services, VC-4 bandwidth-bound cascading technology and virtual cascading technology have emerged. Using VC cascading technology, multiple VCs are combined to form a container with a larger combined capacity, so that SDH equipment can meet efficient access at any rate.

WDM technology utilizes the broadband and low-loss characteristics of single-mode fiber, using multiple wavelengths of light as a carrier, allowing each carrier channel to be transmitted simultaneously in the same fiber. WDM technology uses an optical multiplexer (optical multiplexer) to combine multiple optical signals of different wavelengths and transmit them in the same fiber; at the opposite end, an optical demultiplexer (optical demultiplexer) will be used from the same root The combined signal in the optical fiber is decomposed into multiple optical signals of different wavelengths and processed separately. Compared with the general single-channel system, WDM not only greatly improves the communication capacity of the network system, but also makes full use of the bandwidth of the optical fiber, and it has the advantages of simple capacity expansion and reliable performance, especially it can directly access multiple services. Makes its application prospects very bright.

People usually refer to WDMs with large optical channel spacing (even on different windows of optical fibers) as CWDM (Sparse Wavelength Division Multiplexing), and WDMs with small channel spacing in the same window as DWDM (Dense Wavelength Division Multiplexing ). With the advancement of science and technology, modern technology has been able to achieve multiplexing with a wavelength interval of nanometers, and even multiplexing with a wavelength interval of a few nanometers.

The overall scheme of the distributed radar communication system is shown in Figure 2. 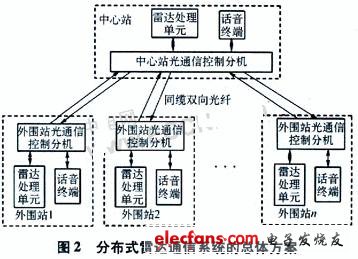