The structural forms and graphic symbols of the main parts of the spool valve of several different "pass" and "position" are shown in Table 5.1.

The meaning of the graphic symbols in Table 5.1 is as follows:

(1) Use the box to indicate the working position of the valve. A few boxes indicate how many "positions";

(4) If there are several interfaces connected to the outside of the box, it means several "passes";

Table 5.1 The structure and graphic symbols of the main parts of the different "pass" and "position" spool valve 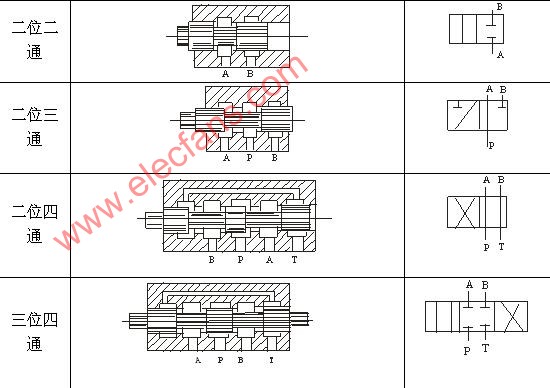 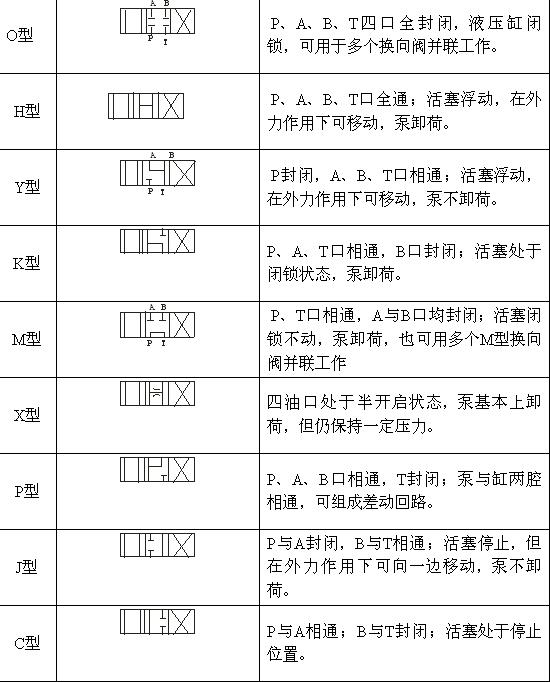 There are many types of spool valve functions for three-position four-way directional valves. The common ones are listed in Table 5.1. The middle box represents its original position, and the left and right boxes represent the two commutation positions. The connection methods of the left and right ports are straight-through or cross-connected, so only one letter is used to indicate the central position. In addition, the three-position four-way directional valve has two transition positions. When there is also a requirement for the connection between the oil ports of the directional valve from one station to another station, each oil The connection state of the port and the throttle mode of the valve port can still derive other spool valve functions. In hydraulic symbols, this transitional function can be drawn between each station channel symbol and separated from it with a dotted line. Figure 5.16 shows two different transition functions of O-type three-position four-way directional valve.

The spool valve of different functions, the valve body is a common part, and the difference is only in the structure of the shoulder of the spool, the axial size and the number of radial through holes on the spool.

Our well-equipped facilities and excellent quality control throughout all stages of production enable us to guarantee total customer satisfaction. Besides, we have received CE, CB, RoHS and CCC certifications.

As a result of our high quality products and outstanding customer service, we have gained a global sales network reaching America, Asia, Europe, Africa, the Middle East and other countries and regions.

If you are interested in any of our products or would like to discuss a custom order, please feel free to contact us. We are looking forward to forming successful business relationships with new clients around the world in the near future.