Skip to content
May 14, 2018
No matter how powerful a smart TV/box is, the real playback speed depends on the local speed! Sometimes the wireless network signal is not good even the normal speed limit can not reach, then in the end the different clarity of the source of the film needs how fast? Xiao Bian today to sort out the common film source and demand network speed comparison.

Of course, the actual speed of the network is very complicated. The results here are for reference only. In the new version of the sofa housekeeper's toolbox, there is also a tool for real-time monitoring of the current smart TV/box speed, and with the evaluation of today's evaluation, selecting the appropriate source source definition allows everyone to watch video resources more smoothly!

To avoid the impact of other wireless device traffic in the LAN, other WIFI devices are turned off. Only the X60 and the laptop are connected to the router in a wireless manner. At the same time, the useless software of the notebook is turned off to avoid the influence of data traffic on the test.

First, routing real-time monitoring interface and sensitivity test:
1. Observe the value of each parameter after closing the unused software. Basically no uploads and downloads.

3. After suspending the Thunder, Thunder stopped downloading and continued to upload. However, after the Thunder software was completely exited, the amount of uploaded and downloaded data completely disappeared. A small amount of data has negligible impact on the test experiment after the test.

According to the content of online live broadcasts, different peaks appear. The blue downloads are partially below the 7M bandwidth, and there is a large amount of idle periods. It is not difficult to see that if a bandwidth is 6M users, the bandwidth is not to be downloaded at full speed. LeTV's live content is basically stress-free.
The length of the specific process can click on the picture 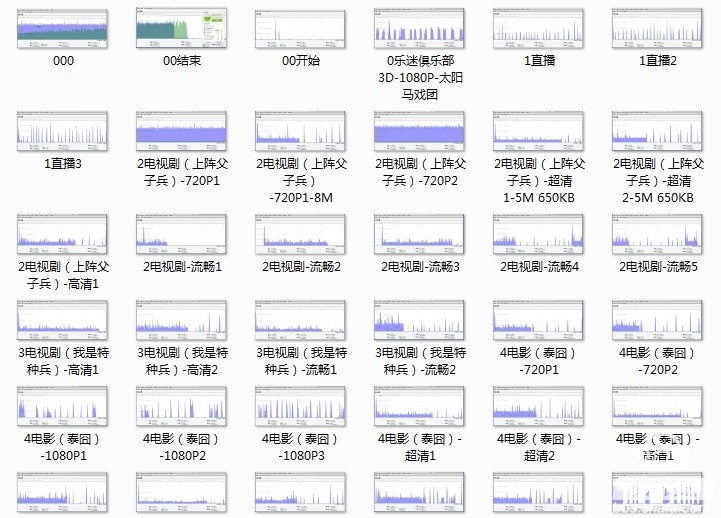 Finally, the commonality can be found by comparing the same resolutions of different videos: The following figure uses â€œfluentâ€ as an example. The comparison is as follows: It can be observed that the download bandwidth provided by LeTV is approximately 4M broadband.